Today is my 15th spiritual birthday. I was driving to school with my sister Brandi on April 23rd when I accepted the Lord into my heart. Jon doesn’t remember the exact date of his salvation, but it was in 1989, SO I made an executive decision that his spiritual birthday will be on April 23rd too. SO, Jon is 20 years old today. I forgot to buy cake on my way home, so we enjoyed some ice cream cones!!!! 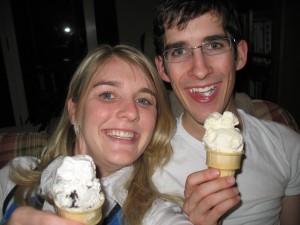 Jon and I had a tax teacher who would always quote that saying, “Two things are certain, death and taxes.” How true. For the past four or six weeks I have been preparing tax returns of some very wealthy people. Did you know that you can tell a lot about a person by their tax return? I learned that the rich are not usually the ones doing the giving. I did probably 20 individual returns this season with an average adjusted gross income (bottom of the front page of your return) of approximately $200,000. The average annual giving was probably $150. My dad would always quote to me “to whom much is given much is required.” My clients must not read out of the same Book.

Another point is that if you oppose one’s view, than you must be a radical or you must not like them anymore. Why is that? I mean polictically the newswires have been going haywire about the Tea Parties occuring all over the nation. The left-wing media is saying that radicalists and possibly terrorists are out at these “anti-government” rallies. Why is it that if you don’t support wasteful spending, you are anti-government? I did have to laugh at the CNN reporter who asked what Liberty and Taxes had to do with each other. Maybe she should also ask Vice-President Biden what patriotism and Taxes had to do with each other. I even see this concept though in the family model. Disagreeing with a behavioral lifestyle comes off as hating, not loving, not “accepting”, etc. It’s even in the church. I remember as a highschooler, my group of friends and I would sit in the amphitheater at the academy. One day we were discussing religious viewpoints. Present in the conversation was a presbyterian (PCUSA), a free-presbyterian, a baptist, a fundamentalist, and a non-denominational believer. I am 100% confident that each person there believed that Christ died on the cross for his/her sins and that without believing and understanding that concept, they would live for eternity in hell. With that being said, the comment was frequently made that maybe Jack the baptist wasn’t as good as Jill the free-presbyterian because he didn’t believe in predestination. Why do believer’s even find it necessary to quarrel over topics that don’t affect salvation. The funny part was the kid that believed in pre-destination didn’t witness to people because “God already knows who’s getting saved. He’ll save them without me.” WOW! Why can’t people just have differing opinions. There are topics in life where we won’t know 100% what is right or wrong until we get to heaven. So, that’s my thoughts for the day on those topics….on to some more fun stuff….

Jon and I are leaving tomorrow after lunch to head for what Joe is officially calling “our second honeymoon.” My firm has given us an extra day off which must be used tomorrow, so we are headed to a cabin in the woods. I’m quite excited. From the pictures, it’s pretty secluded with a gorgeous view and a hot tub. We plan on playing games, watching movies, and hiking all while relaxing in a spacious gorgeous cabin (Do keep in mind, relaxing will include studying for my CPA exam which is ever so quickly approaching).

We have attended three weeks of puppy training with Lexi. It’s been pretty good so far. She does really well with the practicing at home, but at the training, she won’t listen to a word I say, but when the instructor comes up she obeys immediately. What a stinker. She has learned to sit, we are learning down this week, and leave it. The mother in me has left a list for my sister who is dogsitting to keep practicing with her. She will go back to the vet next week for what I think will be her final round of shots.

My hallway project is almost done. The last touches will probably be put on next weekend when we are home again. I just need to hang up a chair rail and some crown molding. I love the colors. They turned out better than I could have imagined. Unfortunately, the curtains I had picked out weren’t the right size, so I will be on the hunt for those again too.

Marathon training is going really well. I’m in my second full week of training. My runs are going well and aren’t too boring yet. I’m going to have to start finding locations that I can run for longer though because the distance is getting longer and longer. Lexi comes with me sometimes, but it’s hard running with her because the vet says she needs to run in the grass, and she doesn’t always like doing that, so she only gets to go when I’m feeling up to fighting with her. My mom and I go to a spinning (cycling) class twice a week as a form of cross-training. That’s been pretty good. It’s a killer, but it’s good. My instructor at that class also designed a weight program I can do at home, so I am hopefully getting a well-rounded training for my marathon in October.

Well, it’s a slow day at the office today, so I’m going to get some studying in for my exam. Have an awesome weekend, and hopefully my next post won’t be so far away. To see some pics from our Easter holiday weekend, check out this link. http://www.new.facebook.com/album.php?aid=238747&id=603205205&l=2cddbce026