#4 – Bring very good walking shoes. When we weren’t riding a bike we were walking. I bought a pair of Sketchers that I thought would be pretty good. I was aiming for somewhat stylish (i.e. not big shoes with white touristy socks) but still comfortable. I wanted something versatile that could match with all of my outfits since we were backpacking and extra shoes meant extra weight. I quickly found out that my shoes, while they matched with everything were not the best for walking in Europe. 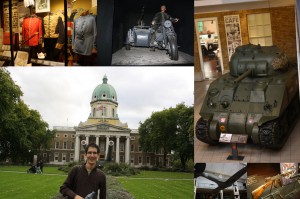 One evening, we went to the Imperial War Museum (“IWM”). It was a free museum and was SO neat. It covered so many wars and some great displays. They even had a display about 007, and the real Spy network that Britain had. The IWM was not the only War related museum we visited. In London, right below where they played Volleyball during the Olympics, were the Winston Churchill War Rooms. Pretty amazing! They were the bomb shelters from World War II. They claim that at the end of WWII that they just closed up the War Rooms and never touched them again until someone came to preserve them. In the situation room there was a big map on the wall, and you could see a pencil drawing of Adolf Hitler. I’m not a history buff, but I did really like both of these museums. Made me wish I remembered more from my History classes so they could mean that much more.

Anyway, you might be asking what that has to do with shoes…I got side tracked. When we went to the Imperial War Museum, we had a great time, but unfortunately, we arrived an hour before closing, and the tram wasn’t too close. So we started walking towards London Bridge so we could see it. According to Google maps, it was a mile away, so you could imagine my disappointment when we got to London Bridge. See, I always sang the song as a kid “London Bridge is falling down, etc.” So I always thought the beautiful bridge in London was “London Bridge.” Well, no, that’s Tower Bridge. So then we went down by the Thames River to walk to Tower Bridge and maybe find some dinner. It was another mile to Tower Bridge. It was on this walk that we captured (“we” being the royal we since we were in Britain and all) some amazing pictures. We passed up all of the restaurants on that mile walk, crossed the bridge, and started coming back towards our hotel. Wouldn’t you know our hotel was another 2.2 miles! Our poor feet were so tired when we got back to our hotel, but it was such a beautiful evening, and on the way back, there were NO restaurants. We found a really nice Pub near our hotel. If you asked me to picture a British Pub, it was exactly as I would have imagined, and the food was incredible! I just started thinking that I may have to do a separate post about our favorite meals. Jon and I still randomly say, do you remember that meal….ah, the food was good!

#5 – Know what you are ordering – After Paris, we boarded the train to some small French cities, Grenoble and Annecy. Grenoble is known for the French Alps and the Bastille which we were able to ride the gondolas to. It was a beautiful city and a small city. The farther we got from Paris, the less English people spoke which made me more nervous, but we managed. We sat down one day to lunch at a Pizza place. I was pretty much in charge of ordering our food because I would practice each evening how to order it. I ordered “une pizza margarita pour duex.” The man responded with a question in French to which Jon nodded emphatically and held up two of his fingers. I definitely didn’t understand. Don’t expect me to understand when you talk back to me unless you can speak slow enough for me to look up each word in my French dictionary. J I was ordering one pizza for Jon and me to share. Whatever the man asked was something different, so we ended up with two really big pizzas. Oops! We carried a big pizza pie around the rest of the day and ate the rest of it high above the city at the Bastille.

#6 – Don’t ask the lady to “cut the cheese.” – Okay, so I was just looking for a way to say “cut the cheese,” but after Grenoble, we boarded the train again and headed for Annecy. From what I understand, Annecy is the place the French vacation, our Florida maybe? Annecy was breathtaking! The little town is situated right next to Lac D’Annecy (Lake Annecy) which was surrounded by beautiful mountains. This was another great place for pictures. Just be sure you know what you are taking pictures of especially if you are using the nice zoom lens your husband bought you a couple years ago. 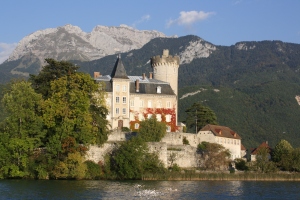 When you’re near water that photo tip is very important. You have to be very careful because the French definitely have a different modesty standard in relation to their birthday suits swimsuits. We zoomed in on a few pictures only to find that they had to be deleted. Oops! While in Annecy, we took advantage of the outdoor market that they had and bought our lunch. We felt very French since our lunch consisted

of grapes, cheese, bread, and a fruit tart. Buying the cheese was funny, because Jon asked in a few different ways and a few different hand gestures for the lady to cut the cheese so that we could eat it right away. She cut one piece, and stared. Jon nodded, and asked for more. In the end, it was one of our favorite meals.

You’ll have to come back for our last three travel tips that relate mostly to our time in Jon’s motherland or is it grandfatherland since that’s the relation? See you next time…